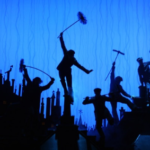 Mary Poppins is a classic hit that remains popular to this day. It’s the movie that familiarized the American public with chimney sweeps. At one-time Dick Van Dyke’s character Bert might have been pretty close to the chimney sweeps in the early part of the 1900’s. In the late 1970’s that all started to change.

Today’s North American chimney sweeps are actually chimney technicians with high-tech chimney cleaning and inspection equipment. After inspecting your chimney they may talk to you in a language not so different from a computer scientist, a NASA engineer, a doctor or other professional. What used to be a quick brush down of the chimney flue has turned into a much more intensive evaluation of the whole chimney structure along with the chimney cleaning. This is what you can expect when a chimney sweep evaluates your chimney.

The most important part of having your chimney swept is actually the inspection. Chimney sweeps perform a basic visual inspection of the condition of the chimney while in the process of sweeping.

Chimney sweeps may be prompted to provide an increased level of inspection based on the following situations: evidence of damage; questions about improper construction; if a potentially damaging situation has occurred
(chimney fire, storm damage, earthquake, etc.); if the home was recently purchased or if a different appliance was connected to the chimney.

Items considered during an inspection include whether the chimney meets codes for clearances, proper construction and quality of workmanship, etc., and whether the chimney was built for its present usage. For example, if a new furnace is hooked up to a chimney built with a large flue that was appropriate back in the 1950s, the flue may be twice as large as it needs, resulting in venting problems.

Another aspect that’s considered is whether the chimney is currently fit for use. Chimneys are exposed to extreme conditions inside and out. It can be exposed to intense heat, extreme cold, acids, moisture and other conditions inside the flue and outside the chimney all at the same time. Often it may be hot on the inside and freezing cold on the outside. This stress can lead to degradation and chimney professionals evaluate this every time they come to clean your chimney.

According to the National Fire Protection Standard 211, a chimney shall be inspected and cleaned, if needed, annually. However, some conditions such as frequency of usage, purchase of the home, changes of appliances connected to the chimney or some type of damaging event is another reason to call your chimney professional before waiting for an annual visit.

Although it’s very important to have your chimney cleaned, one of the most important aspects of the visit is to have it thoroughly inspected. Most chimney professionals go through many months of training before becoming a sweep and ongoing education in this industry is a must. Techniques, equipment and codes are continually evolving and a good chimney pro stays at the forefront of this technology.